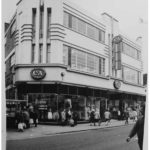 From: Mike Mills by email I remember the Choumert Road Market, and the wonderful atmosphere at Christmas, during the late 50s and early 60s. In those days the stalls would stay open until late at night, with people leaving it until the last minute to get a cheap turkey or chicken for Christmas. I seem
Read More

From: Iris Gardener Mottingham I always enjoy getting the magazine – it brings back so many memories of my 50 years in Peckham. I was so pleased to see the photos of the Heaton Arms and Co-operative House as I lived in Sternhall Lane. Everything was close at hand. My mother sent us down to
Read More

From: Alan Crout by email Whilst reading the letters on the society’s website, I noticed one from Audrey McCall of Hastings asking if anyone remembered Arthur’s newsagents on the corner of Queen’s Road and Pemell’s Place. I remember Arthur Baker very well as I delivered papers for him. I did the morning round and the
Read More

From: Stan Spencer by email To the best of my recollection (1930s to 1950s) there was not a market as such in Bournemouth Road. However, there were a couple of stalls at the Rye Lane end of the road, one of which was a farm stall run by people called Taylor. There was also a
Read More

From: Mrs June Brown (née Wilks) Preston Each edition of Peckham Society News gives me more and more pleasure. I would like to thank all concerned for the hard work involved in putting it all together. As a child living in Cator Street, I went with my mum to get our tea [from Strudwick’s fish
Read More

From: Frank Staples Cheltenham GL52 I well remember an Italian family who kept a sweet shop on the corner of Archdale Road and North Cross Road in East Dulwich in the 1930s. I think their name was Gulliano; they were very well known in the area. Ice cream was made in the kitchen of the
Read More

From: Peter Butler by email Roger Burrell was the rugby coach during the early 1960s. If I remember correctly, during my second year at the school the rugby squad colours were all black and all the competing teams did the Haka before the game. From: Philip by email I was in the “All Blacks” at
Read More

From: David Wells by email Letters about Peckham Manor School have prompted me to write that I attended it (1968-1973). I remember the “Technical Wing” being the thing that must have saved many of us from going off the strait and narrow. They employed real teachers, people from industry, who showed us how to use
Read More

From: Kathleen Corbitt (née Nelson) Leighton Buzzard I was a pupil at Peckham Central School from 1936 until 1940 and remember the school lamp. If it was lit then all was well with the school but when unlit this meant that somebody had misbehaved and brought disgrace upon the school. It was unlit on one
Read More 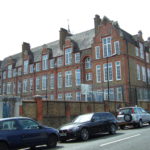 From: Jack Holman  Hooray, at last someone has written who actually went to Ivydale Road School! So did my sister and I before we were evacuated to Hurst Green /Oxted and went to Merle Common School. I spent the last months there mending the shoes of pupils and masters/mistresses until I returned home to 41
Read More