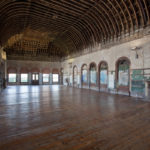 The two architects on the Peckham Society’s committee, Bill Morris and Benny O’Looney, are playing a major part in trying to bring the former First Class waiting room in Peckham Rye Station back into public use. It has been a billiard hall. It may become a restaurant – or a pub as happened at the
Read More

Peckham Space in Peckham Square opened in June. It is a new venue that produces new artwork in response to and with people who live in SE15. Peckham Space was created by a collaborative partnership between Camberwell College of Arts, University of the Arts London and Southwark Council.
Read More

Bellenden Road Nature Garden, run by the Centre for Wildlife Gardening in Marsden Road, was officially opened on 1 August by Councillor Mark Glover, who is one of our members. It is a peaceful haven promoting wildlife gardening in an urban setting.
Read More